Guest post today by my husband, Andy. He shares a little of his perspective on James’ NICU journey. Thank you Andy!

The Brits have a saying that is quite unique and very random sounding to those who have never heard it before. “And Bob’s your uncle.” For those who are unfamiliar with the saying, it means that you are good to go with a task or project. For example, if someone is explaining directions they might say, “Turn right, go to the end of the road, you’ll see a cottage with a white fence…and Bob’s your uncle,” meaning you have found what you’re looking for. Instructions in completing a task may sound like this, “Put the screw in the hole, line it up, tighten it down…and Bob’s your uncle.” You have completed the task at hand.

Early on in our NICU stay we were told (very wisely) that we needed to forget about long-term goals and all the steps down the road, and just live in the present. Don’t think about next week, next month, or when you may be going home. Those were all abstract concepts. Sometimes we couldn’t even think about the next day. We were tasked with getting through each individual day sometimes hour by hour. 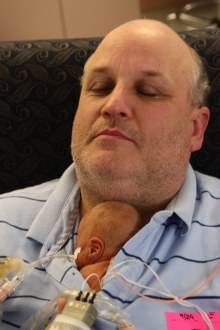 One Thursday, many weeks into our journey, Dr. York was making her rounds. James had somewhat stabilized and wasn’t requiring such high concentrations of oxygen to keep his blood oxygen level in a good place. Dr. York examined him, went over his chart, and contemplated a game plan for moving forward in his treatment. She then approached us at his bedside and said, “OK, here is what we are going to do, starting Monday…” and I really didn’t hear anything after that point. She was talking, but all I heard was that for the first time someone was looking at a time-frame outside of the next 24 hours. It was our first glimmer of real hope. His doctor actually verbalized that she expected him to make it through the weekend. That meant everything to us. I can’t really explain what we felt when we looked at each other, but we both felt the same excited feeling, and we could exhale just a little. The entire medical team was quick to point out that we were not out of the woods yet. He still had a lot of serious issues and a lot of hurdles to overcome. It was still going to be a long journey, but that one moment of hope was exactly what we needed to hear at that time.

One day, when I was sitting with James in the NICU, the nurses in the unit were discussing the English term “and Bob’s your uncle.” They were explaining it to the other nurses, trying to figure out how it came to mean what it means, and using it in sentences. Occasionally, when it was appropriate, we would use it in a sentence and chuckle about how funny it sounded. 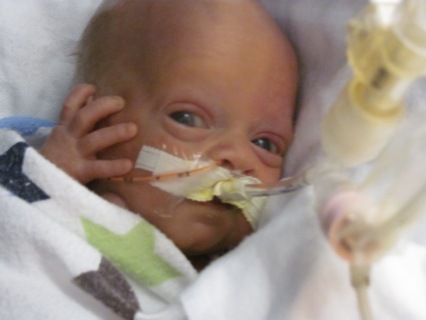 Fast forward to December. It was over 4 months into our NICU stay. James had done great. He was off the ventilator, the OT’s were preparing him to take a bottle, and everything was chugging on along. Dr. York had been on rotation at other hospitals for a while and hadn’t seen James in weeks. She was on one day in December and came in to examine him. She saw how well he was doing, threw her arms up and said, “This makes me happy, this is what I like to see!” She continued to examine him, reviewed his charts, and came back to talk with me at his bedside. She said, “Ok, here’s what we’re going to do…” and outlined a plan. There were a few things that needed to happen, then we would do this and that, and then in about two weeks… I stood there silent for a second; waiting for her to say what would happen in about two weeks. She just looked at me, so finally I asked. Dr. York just grinned and said, “You take him home.” I was stunned and didn’t know what to say. I think I said something like, “Uh, excuse me. What was that last part? We get to take him where?” She said, “You go home!” I was still stunned. That was the first time anyone verbalized anything about us being able to take James home. I couldn’t wait to call Alison, who was at work that day, and tell her. I was so happy when she answered the phone. It was all I could do to hold back tears of joy as I told her what Dr. York had said.

Not too long after that we met with the next doctor on rotation who laid out a more detailed “roadmap.” He explained what needed to happen, and then he used the word we had never heard used when referring to James by any of the medical team. He used the “D” word. He actually said Discharge. Alison and I looked at each other and it was all we could do to keep from shedding tears of joy. It had been a long time. Going home and all that involved was such an abstract concept. We were somewhat blindsided by all the talk of being discharged and bringing James home. We hadn’t even taken the time to prepare his nursery yet. But at that point, all I could think was that for the first time when discussing James, the doctor said we need to do this and that, wean him from this, and get him to do that…and I finished the sentence in my head and said, “And Bob’s your uncle!”

One thought on “…And Bob’s Your Uncle”