I’ve been reflecting a lot on James’ NICU stay the last couple of months. Its that time of year. Two years ago we had about 4 months of James’ NICU stay behind us, but some very important weeks were coming up. So many amazing people contributed to his care in the NICU. People we will never forget.

The first to come to mind most often are the doctors and nurses who cared for James. And rightly so, he had some of the best! But some of the people we bonded with the most were the Occupational Therapists who worked with James, and one in particular, Chrysty.

We connected with Chrysty right away. I remember the first time she discussed his developmental plan with me. She explained why he needed a gel pillow under his head and the importance of 360 degree boundaries for James. She discussed his stress cues and why we needed to know them. She told us why it was best to keep it quiet and dark around his isolette. And one of the most important things she taught us was how much James needed to feel our touch and hear our voices.

I was scared to touch James at first. His skin was so fragile and sensitive. I was afraid my touch would hurt him. Along with my husband, Chrysty gave me the confidence I needed to touch James’ foot, let him hold my finger, to talk to him, and eventually to read and sing to him. She helped me bond with my tiny baby boy. She helped me feel like his mother.

As James grew his developmental plan changed. We discovered a time when he could handle our touch and our voices at the same time. She helped with positioning for kangaroo care. And, she helped us to know when he was ready to try a pacifier for the first time – something he grew to love. Eventually he could spend part of his day in a bouncy seat and even a swing. He loved hearing music in his crib. Chrysty taught us how important it was for him to have quiet times, too.

After many months, our final obstacle to going home was feeding. His doctor was leaning toward a G-tube, even though James had never tried to feed orally. Chrysty was vitally important in convincing the doctor to allow her to do a feeding evaluation first. Chrysty spent a lot time with us, teaching us what to do to give James the best opportunity for success with a bottle. I’ll never forget his first feeding attempt. She held him in side-lying and let him taste the milk first, then he started sucking. His eyes were so big! He loved eating and was able to come home just two weeks later. I know his feeding success had a great deal to do with Chrysty. 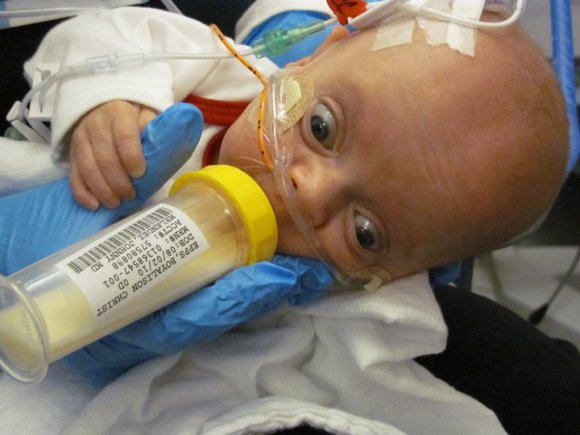 There were lots of ups and downs throughout James’ NICU stay. We had many amazing people who cared for James, and are thankful to each and every one of them. I am especially thankful to Chrysty, and all of the OT’s who worked with James. They helped me see past the wires and tubes surrounding James, and taught me how to just be his mom.