It’s been about five weeks since we developed a plan to address James’ sensory processing difficulties. I wanted to post an update sooner, but he’s been sick for about three of those weeks. Because he hasn’t felt well, I haven’t been as structured as I wanted to be with the changes to James’ daily routine. Definitely not stressing about it though. Life happens at its own pace. We are making changes, and time will tell if they are working for James.

The main goal I had when beginning this process was to find a few strategies for calming James that will help him be more successful in school. I think the classroom environment may be overwhelming for James at times, especially in the beginning. When he’s overwhelmed he gets agitated, doesn’t function well, and usually throws things in an attempt to clear the space in front of him. He’s going to need a few strategies to help him cope with the business of a classroom.

To develop James’ plan I consulted with a very trusted therapist who has LOTS of experience with sensory processing issues, and LOTS of experience with children who have a birth history similar to James’. If you have concerns about sensory processing issues with your child, I would encourage you to do the same. Early Intervention is a great place to start. If they can’t address your concerns themselves, they can point you in the right direction to find someone who can.

James is a sensory seeker with his body. When it comes to play, he likes rough and tumble play, crashing into objects and people, climbing, jumping, anything with high impact. Spreading some ‘heavy work play’ activities throughout the day, will help James attend to and process learning activities for longer periods of time. We want to give him the opportunity to do these type of activities in a safe environment where he is never forced. Encouraged, yes, but if he isn’t feeling it, that’s ok. The activities are there for him to engage in when he needs them.

So we made a few changes, both inside and outside. Some we are still working on, and some I don’t have pictures of yet. I thought I would have lots of time to take photos, then he got sick and has spent lots of time laying in our laps for a few weeks. But, here are a few of the things we’ve done that have worked well for James. 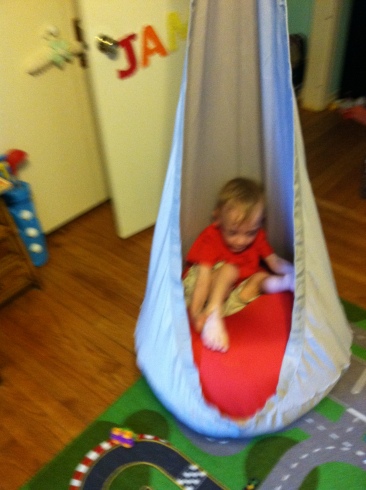 Not a good photo, sorry, but the only one I have right now. We bought this little indoor swing at IKEA. The swing, the inflatable belly, and the hardware to attach it to the ceiling came to about $35. Not too bad for an indoor swing. He liked it, but was a little unsure of it at first. He enjoys it much more now, and usually lays down, completely relaxed, while I push him. For safety reasons, I hang it out of reach when we’re not using it. It’s a different feeling for him than the outside swing, and it definitely calms him. Before our ARD Meeting a couple of weeks ago I had him jump, then swing in here for a bit. He was able to sit for over an hour at the meeting before getting antsy.

James’ trampoline. (And, yes, he has a pink trampoline. I ordered it from Amazon, and the pink one was about $30 cheaper than the blue one, so we added a little color to his world.) James is still learning to jump on his own, so there are no photos of the trampoline being used the way it’s intended, but with help from one of us he jumps and jumps and LOVES it. When he’s jumping he laughs so hard and never wants to stop. Makes me wonder if it is revving him up or calming him down, but he loves it so much we’ll keep on doing it.

Difficult to tell from the photo, but we basically made him a box of pillows. It’s dark and quiet and he can swish around, pushing with his arms and legs, and feel all the good pressure he likes in his joints. He needed a little time to get used to this one, but likes it now. He can climb in anytime he wants, but this is one I encourage when he’s bouncing off the walls out of control. I will direct him to his ‘squish box’ when he needs a few minutes to calm down, and it definitely works. 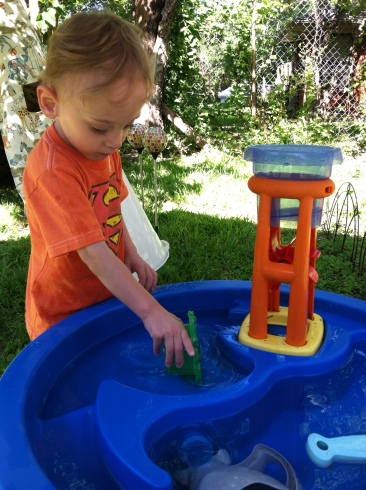 Outside James has his swing, slide, water table, sprinkler, sand and dirt to dig in, and a big area to run. We’re still working on adding more sensory activities outside, but with the really hot weather coming we’ll probably be inside other than water play. James loves anything we do outside though, so we’re trying to make it a really good environment for him.

All in all I think the changes we’ve made so far have been successful. James can get his need for high impact play met, and we have a few tools his teacher can use to help him be more successful in the classroom. It’s definitely an ongoing process, and we’ll continue to make changes and add new activities to keep it interesting for him. We’ll do whatever we can to help our little sensory seeker crash around in a safe place.