One year ago today we brought our little guy home from Our Children’s House, a rehab facility in Dallas. For those of you new to 22w6d, James spent five weeks in the hospital and ten days at OCH last winter due to RSV and pneumonia. We left OCH before James was ready, but he was regressing even further. We felt it would be best for him to recover more at home before doing intensive rehab. 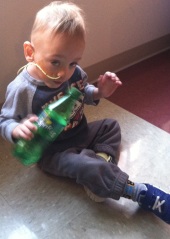 Playing on the floor a few days before James left OCH.

When James came home he couldn’t stand or walk. He wasn’t eating and relied completely on an NG tube for all of his nutrition. It was a bittersweet homecoming. We were so thankful he was home, but developmentally, he had a mountain to climb just to get back to where he was before his hospitalization.

James’ body weakened significantly from being sedated and placed on a ventilator, which he stayed on for fifteen days. The doctors told us that muscles start to atrophy after just two days of sedation. In fact, patients in intensive care can lose about 2% of their muscle mass every 24 hours (read more here). James was in intensive care for 21 days. We knew he would be weak, but none of us were prepared for just how weak.

Home proved to be the best medicine for James. His motor skills progressed fairly quickly. James learned to walk again, and was getting around the house within a few weeks. He also started taking small amounts of food and drink orally. We gave him lots of time to recover (maybe a little too long), but he never did get back to eating and drinking enough by mouth, and ended up having a g-tube placed in August. It wasn’t until he attended an eight week inpatient feeding program that he began eating everything orally again. And, it wasn’t until he was home from the in-patient program that we felt James was finally back to where he was before he was hospitalized, exactly eleven months earlier. 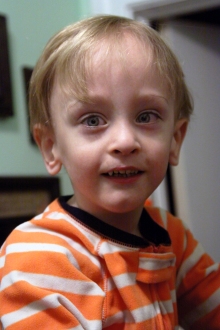 A year later he’s looking so much healthier!

Eleven months. Eleven months spent catching up from a six-week hospital stay. When you’re three and a half years old, that’s huge. Our little guy who already has significant delays from being born so early, now has a year of development to make up for. And he is. We’re seeing an explosion of development in James. But it hurts my heart to think that the things he’s starting to do now, he should have been starting to do almost a year ago, had he not been sick.

Don’t get me wrong though, I am thankful for each new milestone he reaches, and each new skill he acquires. I am so thankful to be in this position. We celebrate with James, we laugh, we cheer; we are so excited for everything he can do. Excited and thankful. And that’s exactly what we focus on today. We don’t think about the what-ifs or the whys, we just say thank you. He has overcome so much, and I am certain that is exactly what he will continue to do.

Way to go little munchkin! We are so proud of you.

2 thoughts on “Recovering From RSV and Pneumonia, One Year Later”

I write mainly about education and inclusion, but my kids insist that all I do is "type."