Life After NICU / My Days With James

This is the most common sight in our house right now. 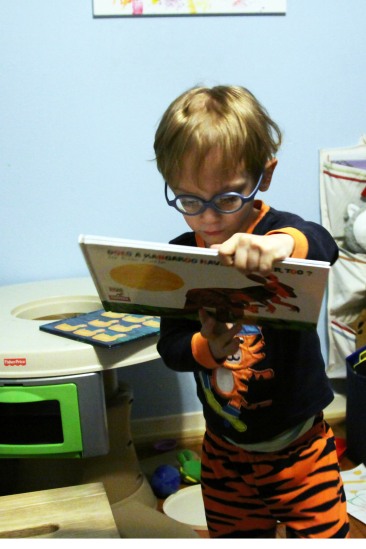 James has always adored books. From an early age he used to pull every one out to find exactly the one he was looking for, then flip through the pages looking at all the pictures. He did go through a phase when he wanted nothing to do with books, but it was brief, and he’s never been interested in the stories that go along with them. Not until now.

Several weeks ago we began a new bedtime routine. A desperate attempt to shorten the falling asleep process. Anything less than 90 minutes is considered success at this point. James’ bedtime routine now includes story time. We tried reading bedtime stories to him in the past, but it didn’t work. Books were far too stimulating, and produced the complete opposite of a sleepy child. Thankfully, that has all changed. Not only is bedtime a little easier most nights, James has discovered a whole new side of books.

This scene is played out again and again all through the day. James brings book after book to us to read. And chances are, whatever book he brings you he’s going to want you to read several times. He’s captivated by the stories, and definitely has his favorites. He still likes Pete the Cat, but the Pigeon has taken over the top spot. Don’t Let the Pigeon Drive the Bus and The Pigeon Finds a Hot Dog are two of his absolute favorites right now. And we’ve just discovered this website. It will surely provide James with hours of fun. Thank you Mo Willems for keeping it interesting. You need a little something when you’re reading the same book a dozen times a day.

As crazy as it makes me at times, all that repetition has its benefits. James has learned so much in the last few weeks. He can point to and say most numbers between 1 and 10 – thank you Eric Carle’s 10 Little Rubber Ducks. He now says ‘yes’ as opposed to ‘no’ for everything – thank you Eric Carle’s Does a Kangaroo Have a Mother, Too? And maybe cutest of all, he’s learned how to tell the emotions of characters through their faces – thank you Mo Willems’ Knuffle Bunny. James truly feels Trixie’s pain as she misses Knuffle Bunny, and he lets us know all about it! The list goes on. He’s recognizing a few simple words, pointing to about six shapes, and naming three colors correctly. Finally our little sponge is showing us a bit of what he knows. Gives me hope that we’re starting to close that gap.

Up until now, the gap between where James is developmentally and where he should be has been growing. Always reason for concern and always on my mind. This burst of knowledge from our little guy lets me take a breath. No, he’s not catching up as quickly as we’d like, but he doesn’t move along in our time frame. Never has. James walks to his own beat and does things in his own time, not a moment sooner. We’re the ones who have to adjust. It isn’t easy for us because it’s different. Different is hard and different is a little scary, but James is teaching us that different is just as exciting.