James’ reunion with his Daddy was more than perfect.

You never know what to expect with James. There was no doubt in my mind that he would know exactly who Andy was when he saw him. I was sure James would be excited to see him, too. What I wasn’t sure of, was how James would react. Sometimes when he’s excited to see someone he gets a little shy and acts bashful. Other times he runs right up to them and leads them to his toys so they can play. I was kind of expecting the bashful James to greet Andy on Saturday, but I could not have been more wrong. 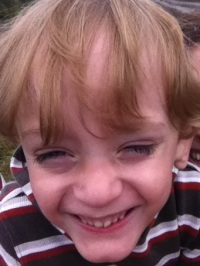 Sadly, I didn’t even get a photo of the reunion. Just imagine this smile, but ten times bigger!!

Friday night I told James that his Daddy would be there Saturday. He doesn’t react to things like that, so it’s hard to gauge his understanding. I think he got it though, at least a little bit, because Saturday morning he was excited and seemed to know something was up. I wish I had thought to video James’ reaction when Andy came to the door. It was priceless!

James squealed and giggled and jumped up and down. I’ve never seen a bigger smile on his face. He laughed until he just about fell over. He kept touching Andy like he couldn’t believe his Daddy was really here. It went on and on – nonstop laughing, smiles, giggles, squeals, and jumping. Then he wouldn’t let Daddy get too far away. He wanted to be held, but only by Daddy. I was told, “Bye-bye Mommy,” and lead out of the room, as James quickly ran back to Daddy’s lap. And I’ve been pushed away more than once since then. Last night I was getting ready to put James to bed when he spotted Daddy. He let go of my hand, walked over to Daddy, and pulled him into the bedroom instead. He doesn’t always use words, but he gets his point across pretty clearly!

James missed his Daddy and could not be happier that he’s here. I think he feels more complete, and hopefully, will settle in even better now. James taught me a lesson Saturday. I should never underestimate his ability to understand. Even if the words don’t come out, it doesn’t mean they aren’t there. Without a doubt, I know that he understands much more than we realize.

4 thoughts on “Daddy Has Arrived!”

Writer. But my kids say that all I do is "type."