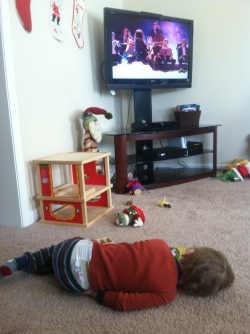 James learned a new phrase over the past few weeks. “More Christmas please.” It is SUPER cute when he says it! Melts my heart and pretty much gets him whatever he wants.  Believe me, if your child has a speech delay and they come up with a phrase like that, they get Pete the Cat Saves Christmas read for the eighth time in a row, or bedtime delayed by thirty minutes so we can watch that Christmas special again.

I love that he came up with it completely on his own. Nobody taught him to say that phrase. He’s connected Christmas with all the special things happening right now, and he figured out a way to ask for more of them.

I’m not sure what it is that indicates to him something is “Christmas.” He says it when looking at his Christmas books and when he’s watching Christmas specials on television. The first time I heard, “More Christmas please,” was at the end of A Charlie Brown Christmas. He actually enjoyed the little peanuts cartoon, especially the music and dancing, and wanted to watch it again. He also used it to ask for Frosty the Snowman a second time. He seems to really connect with Frosty. His recorded book from Grandma has been listened to and loved to the point of beginning to fall apart.

I love that he’s enjoying some of the special things about this season. James will say, “Pretty lights,” as we drive through our neighborhood in the evening. He’s always been excited about Christmas lights, but never been able to verbalize that until now. He’s growing and changing in so many ways.

There’s been one constant throughout each Christmas season for the past three years. Trans Siberian Orchestra. I remember the first time James saw them on television. My mom had the video playing in her room while we were decorating the house for Christmas. James was hooked right away and watched it as often as we would let him. He loves the music as much as their stage show. He imitates their gestures when singing, and this year, started playing the guitar along with them. He plays loud and intense or soft and quiet to match the music.

A few weeks after James heard TSO for the first time, he was hospitalized. He was sedated and on the ventilator, and pretty much unresponsive to us. We tried to fill his room with comforts and things that were familiar to him. We talked with him and held is hand, and we read him lots of stories, but it was TSO that received the biggest response. The first time we played it in the hospital, James oriented himself as much as he could toward the tv in his room. When it finished he tried so hard to move his hands to sign “more.” Needless to say, TSO became a regular fixture during that hospital stay.

The Christmas season is by far my favorite time of year. My Mom and my family always made it so special as we were growing up. I love our little family traditions, and I’m enjoying making new ones with James. I really love that he is discovering things about Christmas that are special to him.

4 thoughts on “Christmas Magic and TSO”